When most people imagine the most romantic city in the world, they probably don’t imagine dark, under city tunnels filled with the skeletal remains of six million Parisians. We are clearly, not most people.

An hour before opening, we stood second in line in front of the rest of the 1% of people who had the Catacombs of Paris on their must-see list. I remember seeing recommendations online, to get to the Catacombs as early as possible, some suggesting as early as 7:00 AM. Do not do this.

As the Catacombs opened at 10 AM, we arrived at 9 AM; and we’re still one of only two groups on the line until about 9:25 AM. I will admit that after this time the line began stretching up and around the block. So definitely grab some delicious coffee and croissants from Paul and arrive early but don’t miss out on your extra hour of sleep to be the first and only person on the line at 7 AM.

For me, the Catacombs was definitely awesome. And for my boyfriend who doesn’t exactly share my love for art museums, this was probably one of the highlights of the trip.

But if you fall into one of the following categories:

C) Are oddly squeamish at the viewing of skeletal remains

then you may want to pass on this attraction.

But, if you fall into one of those categories and aren’t afraid of heights or obnoxiously long lines then our next stop should be at the top of the list. But let’s be real, the Eiffel Tower is most likely already at the top of your list.

From the Catacombs, we caught an Uber over to the 7th arrondissement, in close proximity to the tower. By this time we were starving and decided to stop for a quick lunch. And unlike our less-than-meh meal from the day before, this one received a great score of 4/5

We made the choice to stop into Le Beaujolais on the basis of “Hm, that one looks cute.”

I got the salmon which came with green beans and had a small amount of diced tomatoes on top. I’m not exaggerating when I say that this was one of the freshest pieces of Salmon I’ve ever eaten, and I’ve eaten some pretty good salmon. Perfectly cooked and flaky, and anyone who knows me, knows that I practically eat green beans as a snack; so I had no complaints. He got the roast chicken with these slightly cheesy potatoes, and again not exaggerating when I say those were the best cheesy potatoes I’ve ever eaten, and I did literally eat about half the portion.

Our only complaint, and a very unfortunate one at that is that we ordered the creme brûlée and…well it might have well been labeled “Scrambled Egg Custard” instead of Vanilla. What’s even worse is that this was my boyfriends first time eating creme brûlée and it definitely didn’t live up to how amazing a dessert I made it seem.

But the crepes looked delicious, they have a huge wine collection and if you’re going for dinner, you’ll enjoy it.

After lunch, we headed towards the Eiffel Tower where he had pre-timed tickets for 2:00 PM. I ordered and printed these about two months before we left and it was such a great decision. I know, some people aren’t planners and may want to be spontaneous but if you have to plan anything, purchase pre-timed Eiffel Tower tickets. The lines from each elevator, (ie. ground to 2nd level, 2nd to the 3rd, 3rd to the top) are long enough but we were still up rather quickly, maybe a half hour. However, the general line looked to be about three hours just to get to the elevator to the first level.

*Tip: purchase summit tickets; it’s awesome to be able to check out both of the earlier levels first and get different views. 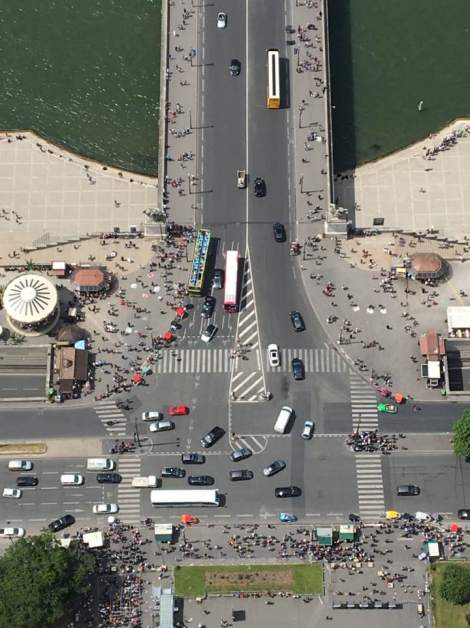 The Eiffel Tower is one of those things you have to experience at least once. I’m not necessarily sure I’d do it next time I’m back in Paris, but there is something very surreal about seeing something or somewhere your whole life and finally actually being there.

After relaxing back at the room for a bit, because we were BEYOND tired and getting dressed we headed out to a small Italian restaurant not too far away, that I had heard amazing reviews about. I know, I went to France and searched for Italian.

The restaurant Enza y Famiglia, of which there are two; the other being more focused on pizza, had about six tables inside, and three outside. Upon arrival we learned that the waitress spoke fluent Italian, a good amount of French and a small bit of English; whereas we spoke no Italian, a small bit of French and fluent English. There is also no menu, but a chalkboard that lists the available dishes. We decided to wing it and it was honestly such a great choice.

I understood nothing on the menu but I did remember the Italian word for eggplant and so that’s what I ordered; he obviously understood “spaghetti”. His dish ended up being spaghetti with a lemon butter sauce and diced tomatoes, which we both thought was very good. But my dish…let me just say, that tomato sauce had to be sent from the heavens because I have never tasted tomato sauce that amazing. That plus the amazing pasta and perfectly cooked chunks of eggplant…well, it definitely makes my need to go to Italy that much stronger.

The mini pistachio cannolis after our entree were mouthwatering as well.

The remainder of the day was spent wandering around the Eiffel Tower-ish area and Place de la Concorde where I, of course, had to reenact the scene from Devil Wears Prada where Andy chooses her soul over a fabulous but conniving career as Miranda Priestly’s assistant. (No I didn’t actually throw my phone into the Fontaine des Fleuves.)

The day ended with chocolate crepes and attempting to decipher French television shows by the actors’ facial expressions. #KindaRomantic ?

Read about the rest of our Paris escapade: